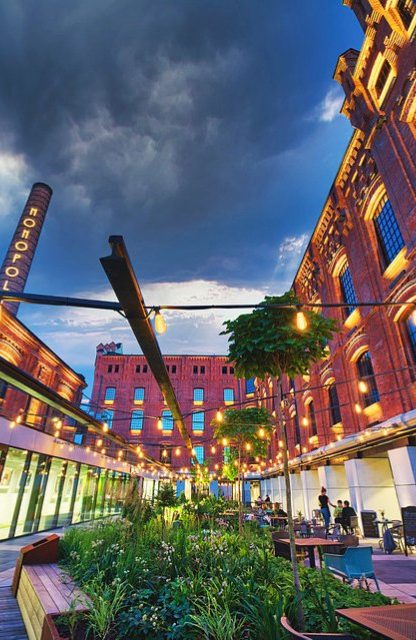 ŁÓDŹ ATTRACTS INVESTORS FROM ALL OVER THE WORLD. IS IT THANKS TO THE PHENOMENAL POSTINDUSTRIAL MIXED-USE COMPLEXES?

In such an unpredictable business environment as we are currently dealing with, investors are extremely cautious in making decisions related to the implementation of new projects and concluding transactions. However, if the conditions start to change, investments will come and new prospects will open up on the market. The changes will bring new opportunities. Some […]

In such an unpredictable business environment as we are currently dealing with, investors are extremely cautious in making decisions related to the implementation of new projects and concluding transactions. However, if the conditions start to change, investments will come and new prospects will open up on the market. The changes will bring new opportunities. Some of the several hundred Western companies that withdrew from Russia or Belarus are likely to locate their activities in Poland. This concerns mainly the production, which will also contribute to increased demand for warehouse, office and residential spaces. We are already being contacted by Ukrainian entrepreneurs who want to protect their companies. It is perceived positively by the segments of our real estate market listed above.

The situation was similar when the pandemic shook the market in the short term. In the longer term, we could observe rapid development of logistics, retail parks and everyday shopping centres as well as rental housing sector. The largest regional cities, which belong to the group of the main business centres in our country, currently present greater value for investors. There are currently many more investments being implemented in these regions than in Warsaw. And it is the regional centres that are now very eagerly chosen by companies moving to us from Ukraine, with IT sector representing a large group.

Łódź as a beneficiary of changes

The beneficiary of market changes is, among others: Łódź, which has recently become one of the best investment locations for companies optimizing supply chains, especially in the case of IT companies. The Łódź agglomeration, located 130 km from Warsaw, encourages investors with its central location, attractive economic zone and developing infrastructure. Łódź, which is the third largest city in the country in terms of the number of inhabitants, is also a competitive market in terms of the costs of running a business compared to other cities.

It is mainly companies operating in the manufacturing and logistics sectors that invest in the city. Centres of modern business services have been already developing for two decades. Moreover, Łódź offers great opportunities for companies from the new technology industry, including gaming and fin-tech companies, as well as e-commerce and digital agencies, which is reflected in the number of new investments in this sector that can be observed recently. Among companies moving from Ukraine, it is the IT sector that is one of the dominant industries. Will this bring new investors to the region? This remains to be seen in the coming weeks, but the potential is high. Łódź Voivodeship, like Pomerania, is one of the most dynamically developing regions in the country.

Thanks to the third largest cargo airport in Poland and a direct rail freight connection with China on the Łódź – Chengdu route which allows to transport goods in two weeks, Łódź is one of the best logistics locations in the region of Central and Eastern Europe. The advantage of the city is its location at the intersection of two most important highways in Poland, the national A1 and A2, connecting Poland as part of the European route E-30, among others with Russia, Germany and the Netherlands. Communication is also facilitated by the trans-European North-South transport corridors: Scandinavian-Adriatic and East-West corridor: Moscow – Berlin.

Łódź is one of the leaders of Polish warehouse markets. It offers facilities of over 3.3 million sq m of space, mainly in the eastern part of the city and in the vicinity of Stryków, at the junction of highways. The Łódź agglomeration is part of the Central Poland region which is the third largest warehouse market in the country, after Warsaw and Upper Silesia. New warehouses are being built in the area around Łódź, and a direct rail connection with China is driving the development of e-commerce. It is difficult to estimate the impact of Russia’s aggression against Ukraine on the Polish warehouse market. Increased demand for warehouse space is noticeable, but we also observe disrupted supply chains for building materials, especially steel, which will most likely lengthen construction processes.

Thanks to the investment potential of Łódź, this location is in the centre of interest of investors from all over the world, including the African continent.  They include, among others, Fortress REIT Limited investment fund. It is a company listed on the Johannesburg Stock Exchange, operating mainly in South Africa, in the REIT (Real Estate Investment Trust) model. The investment fund generates income mainly from the rental of real estate, and distributes profits to shareholders in the form of dividends.  The fund also owns premium logistics real estate. It is planning to construct MDC2 Park Łódź South, which will be built at the junction of the A1 motorway and national roads No. 91 and 12. The project involves the construction of a logistics park with an area of ​​80,000 sq m. The construction team aims to obtain BREEAM New Construction certification at the Excellent level. In addition to its primary logistics real estate portfolio, the fund owns over 50 retail centres.

The Łódź agglomeration has retail facilities with an area of ​​490 thousand sq m, concentrated in 16 shopping centres, including two facilities with an area of ​​over 100 thousand sq m – Manufaktura and Port Łódź. In Rzgów near Łódź, there is also the Ptak Fashion City, a commercial zone, which is one of the largest multifunctional shopping and entertainment complexes in Europe. In 2020, the Ptak Market retail park was also opened. The pride of Łódź is Piotrkowska street, one of the longest shopping avenues in Europe, with approximately 320 shops, service and catering establishments.

Łódź is also currently in the centre of interest of American investors. In April this year this appealing location attracted a Texas company listed on NASDAQ. TaskUs, an American BPO company, is a provider of digital outsourcing services for innovative companies in industries such as social media, retail, e-commerce, gaming, hi-tech, fin-tech and health-tech. It is the second service centre of TaskUs in Eastern Europe, next to the centre in Romania.

Interest in the implementation of projects in Łódź Voivodeship is significant. There are inquiries not only from investors from Africa and America, but also from the Middle East. These locations are also eagerly chosen by both private and institutional investors who are looking for investment assets in the commercial real estate sector, especially retail parks.

Another asset of Łódź are infrastructure investments, including the construction of a cross-city tunnel started in 2020, thanks to which Łódź Fabryczna, one of the most modern railway stations in Europe, will become the main transfer junction in central Poland. A revitalization and expansion of New Centre of Łódź, the largest infrastructure project in Europe, covering an area of ​​100 hectares in the very centre of the city, is also carried out. A modern business district, well connected with Warsaw, is being built there.

Modern facilities such as Nowa Fabryczna, Brama Miasta, or Przystanek mBank have already been handed over in the New Centre of Łódź, and new facilities and subsequent phases of projects under development, offering office, hotel and residential functions are under construction at various stages.

One of the largest recipients of offices in the city are IT companies and the modern business services sector. In recent years, shared service centres, companies from the IT and BPO sectors have gradually expanded their activities, allowing Łódź to be ranked fifth in the country, in the second group of BPO / SSC centres in terms of employment in the sector and its maturity. Today, over 26 thousand people work in 92 modern business services centres in Łódź, and the annual increase in employment is over 11%.

Łódź is the seventh office market in the country. It offers over 580 thousand sq m of space in 96 office buildings, and almost 90 thousand sq m remain under construction. Over the past five years, the office resources of Łódź increased by over 60 percent. Thanks to the construction of attractive commercial facilities, such as the award-winning Monopolis complex, or the Fuzja, Textorial Park, Hi Piotrkowska projects and the recently completed React, the city is gaining more and more importance as a business centre.

Mixed-use developments in a post-industrial style

The attractiveness of Łódź is certainly enhanced by the famous post-industrial mixed-use developments based on the revitalization of former industrial sites with characteristic red brick buildings.

The base of the Monopolis complex are the buildings of the historic plants of Monopol Wódczany from 1902, whereas the base of Księży Młyn is a historic factory complex including the estates of the Scheibler and Grohman families. Piotrkowska 217 is a cultural and entertainment complex that was built in the space of the former iron foundry of Józef John. The multi-stage Fuzja project is located on 8 hectares of former Karol Scheibler’s textile factories which are the heritage of Łódź Fabryczna.

In Widzewska Manufaktura, there are four 140-year-old post-industrial buildings entered in the register of monuments as an urban complex of post-industrial Łódź. Historic buildings will also be preserved in the planned multi-functional project Targowa 2, located in the New Centre of Łódź near the Łódź Fabryczna station.

The result of positive changes that Łódź has undergone in recent years are the city’s winning positions in prestigious rankings. In the Business-Friendly Perception Index ranking in 2021, Łódź was recognized as the most attractive city for business in Central and Eastern Europe. It was also ranked first in the Emerging Europe – Business Friendly Cities Perception 2020 ranking in the category  Business Climate – the most friendly city.

In 2020, the Łódź Special Economic Zone was recognized in the fDi Magazine (Financial Times) ranking as the best economic zone in Poland and the third best in the world.